If you are looking for a delicious and easy Lebanese dessert to make for Ramadan, look no further. This Lebanese Nights Dessert (Layali Lubnan, ليالي لبنان) is a very famous Lebanese dessert widely served all over Lebanon. It is one of the most served dessert at home because of it’s ease. 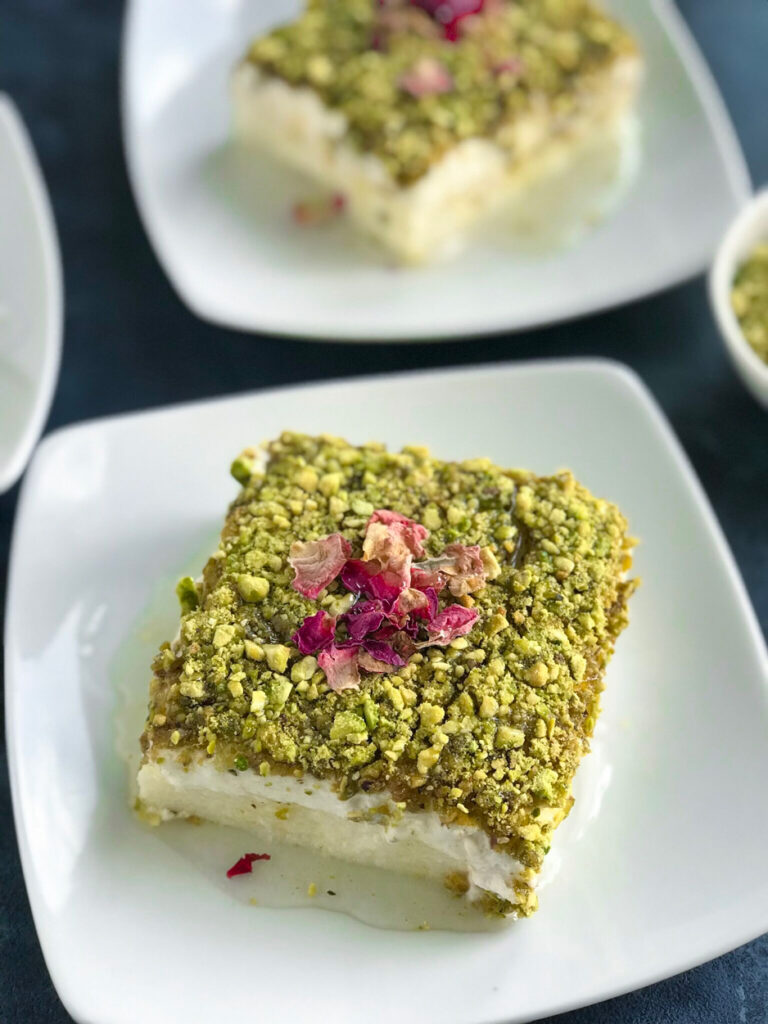 Lebanse Nights Desserts is made from a silky semolina based pudding, topped with Ashta (thick cream), whipping cream and pistachios. The word LAYALI LUBNAN, ليالي لبنان, means Lebanese Nights. This dessert is known for it’s fragrant smell of rose and orange blossoms. Those are a key ingredients to making the sugar syrup that’s served with this dessert. Even though this dessert is Lebanese, it is also made across the Middle East in different variations.

HOW TO MAKE THE LEBANESE NIGHTS DESSERT?

This dessert is one of the easiest desserts you can make. It’s the most made dessert at home for families because most of the ingredients are already in every Lebanese family’s pantry. And because it’s so easy to make, most families prefer to make this dessert for many occasions.

MAKING THE BASE FOR THE LEBANESE NIGHTS DESSERT:

The Lebanese Nights Dessert (Layali Lubnan, ليالي لبنان) base is made from Semolina flour, which is also known as Durmun Wheat. There is fine semolina and coarse semolina so please be careful when you buy it. You will need coarse semolina for this recipe. It is found is most oriental stores and on Amazon. I have also seen it in the bulk food area at Sprouts. But I prefer the ZIYAD brand.

I start by placing all the base ingredients in a pot. I will list the ingredients measurements below. That is the milk, semolina flour, sugar, and Orange Blossoms Water. Orange Blossoms Water can also be found in every oriental stores or on Amazon. Place the pot on medium heat stirring occasionally until it starts boiling. Once it starts boiling, bring the fire down to low-medium heat and continue stirring until the texture is very thick like a pudding. Shown below. 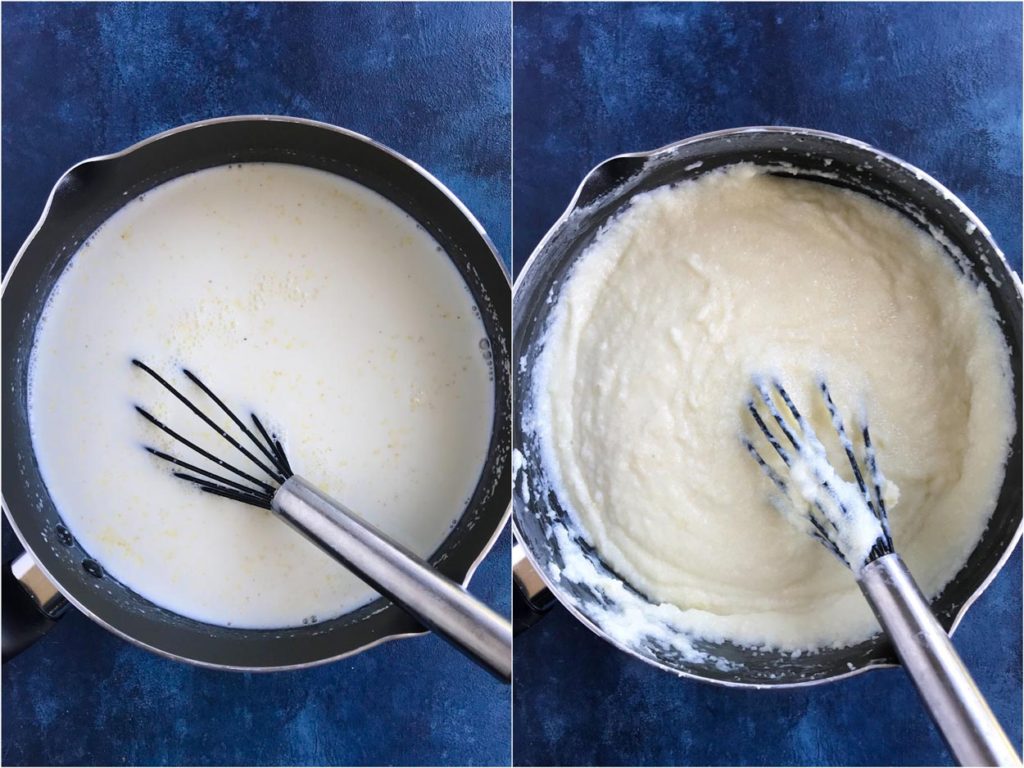 Once that is done, transfer the pudding mixture onto a Pyrex bowl. Do no use something too small or else you will have a very thick base. It should be 1 inch thick at the most. I use a 9 x13 inch bowl. Place a plastic food wrap on top of it to prevent the top from drying up. Let it sit on the counter for 20 minutes and then place it in the fridge to get cool for another 45 minutes. The semolina base should be completely cold before you place the whipping cream on top. 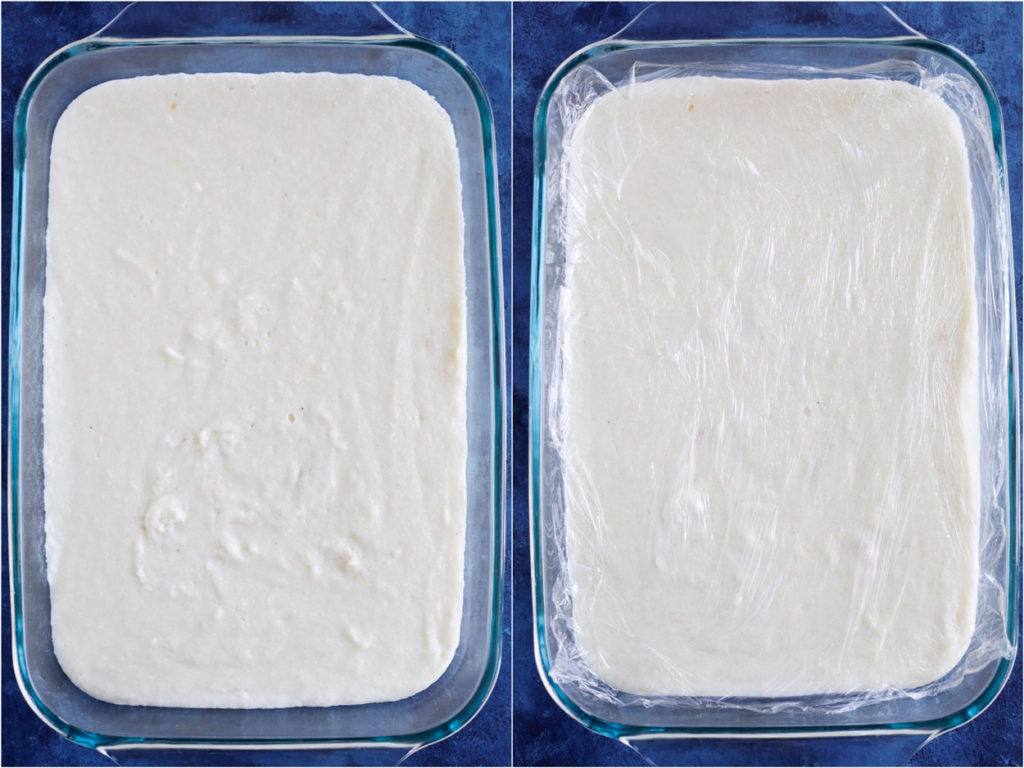 You will need to buy liquid heavy cream to whip up at home. Please don’t use those envelope whipping creams because it’s not going to taste as good. Whip the cream and gradually add the icing sugar as the cream starts to thicken up. It’s important to have a pretty thick whipping cream because you don’t want a loose cream for this recipe. Chilling the heavy whipping cream before whipping it helps firming it up.

Another thing I add before placing the whipping cream is a layer of fresh cream. Fresh cream or also known as Ashta, is a thicker cream sold in the oriental stores. The brand is Puck or Nestle, and you can find the nestle fresh cream at Walmart. I always get it from there in the oriental food section. I believe it says table cream on the one available at Walmart. Many people don’t add this cream but I think it’s a game changer! I love it! 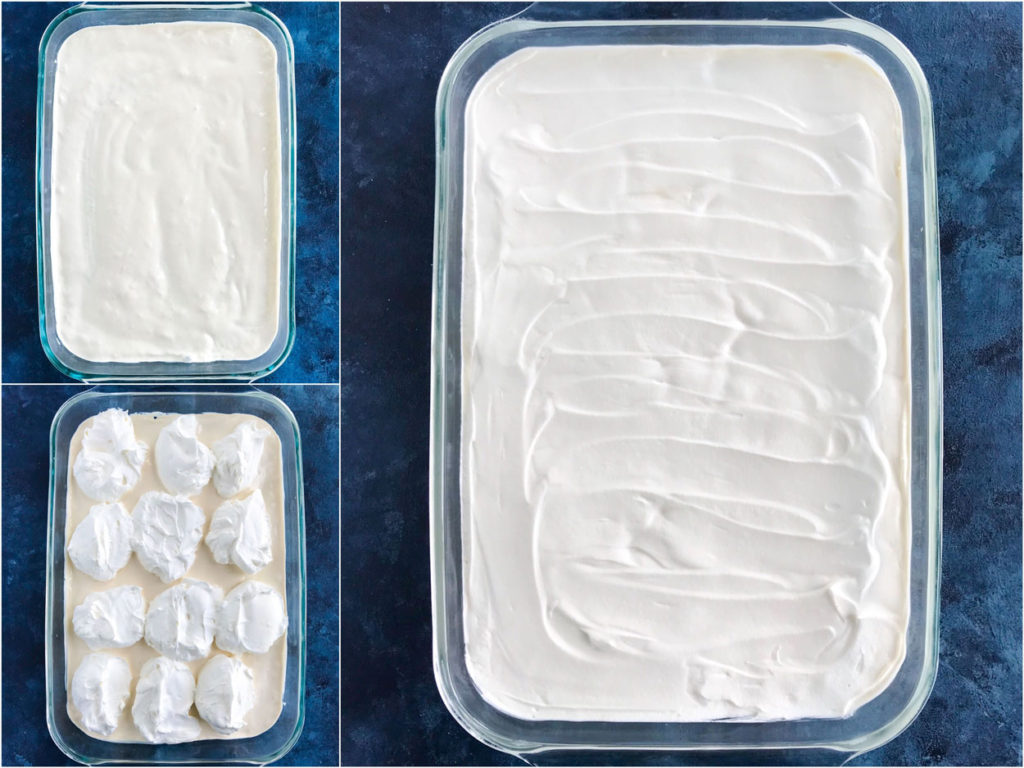 After removing the clear film, spread the fresh cream all over to cover the base. Then spread the whipping cream as shown in the photo to easily manage spreading it because with the thick cream on the bottom, spreading the creamy becomes slippery. This way works best.

Processing the pistachios to top the pudding is a must for me. Highly recommended. Also some people wait and add the topping later when it’s ready to be served. I like topping it right away and letting everything sit in the fridge over night before serving. If you prep this early in the morning, you can serve it later that evening. When the pistachios softer and soggy, they tastes so flavorful. Just let it sit in the fridge for at least 6 hours after adding the whipping cream and pistachios. 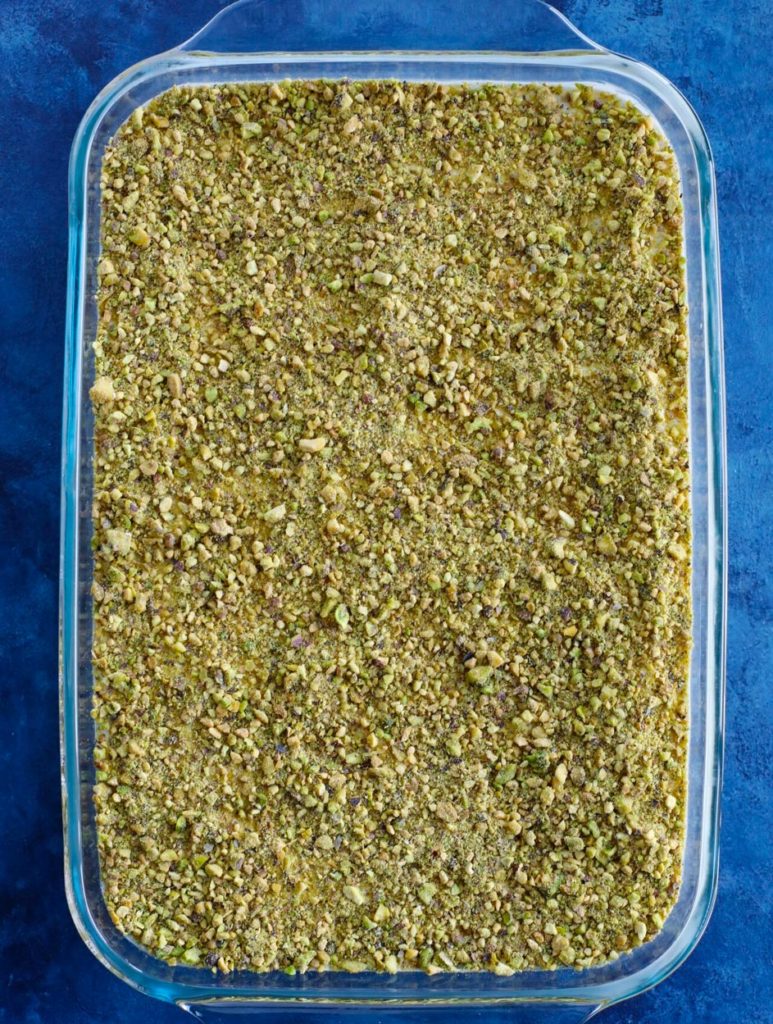 When serving, you will top with the sugar syrup (recipe included below). You can store this dessert for up to 2-3 days in the fridge. I think it tastes best the first two days. If you have a small family and don’t want left overs, use only half the ingredients. 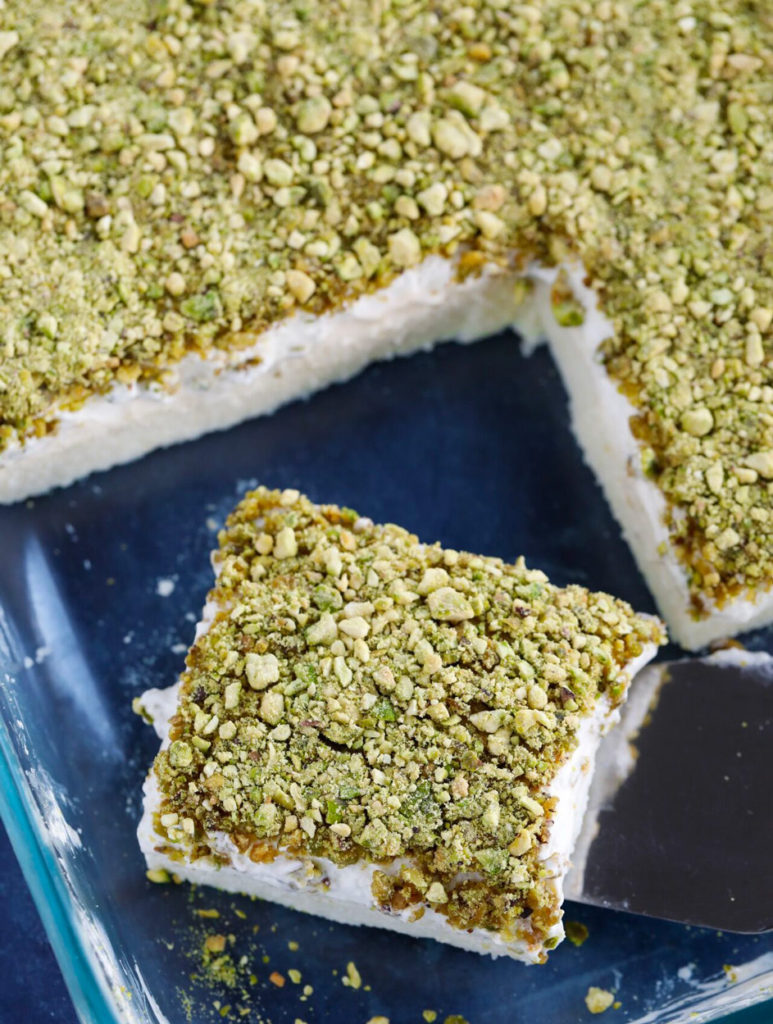 A day of fasting is never complete without some good dessert neither is any other occasion. Dessert is a must in every one of my gatherings or occasions. My family loves Lebanese desserts so I always make something different every time. I hope to share more with you some day. Learning how to make them changed our lives because we live far away from anywhere that sells Lebanese Desserts. If you try and enjoy this Lebanese Nights Dessert (Layali Lubnan, ليالي لبنان), rate it and share it with your friends and families! You can always tag me on Instagram so I can repost your delicious recreations. Xoxo… 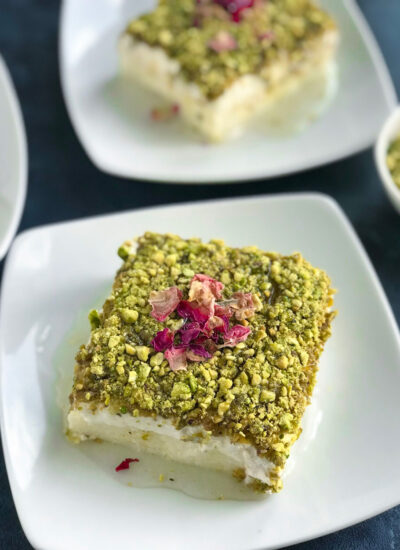 5 from 23 votes
Created by Mariam E.
This Lebanese Nights Dessert (Layali Lubnan, ليالي لبنان) is a very famous and delicious Lebanese dessert that is super easy to make. The best recipe ever!
Print
Pin
Rate

Cookin' With Mima blog is a place where you can find hundreds of easy and delicious family-friendly recipes that are bound to please even your toughest critics. My goal is to make your cooking experience a lot easier and yummier! 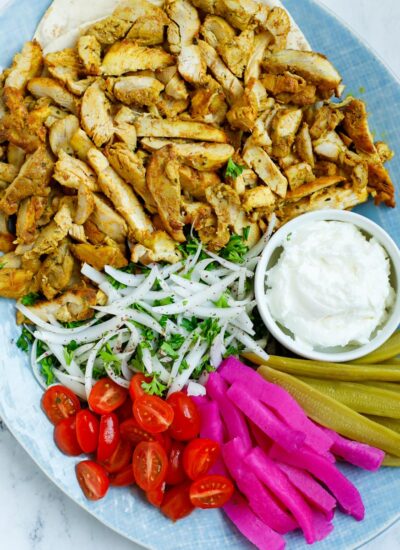 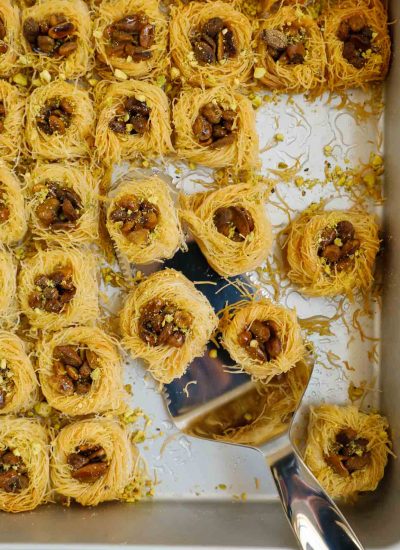 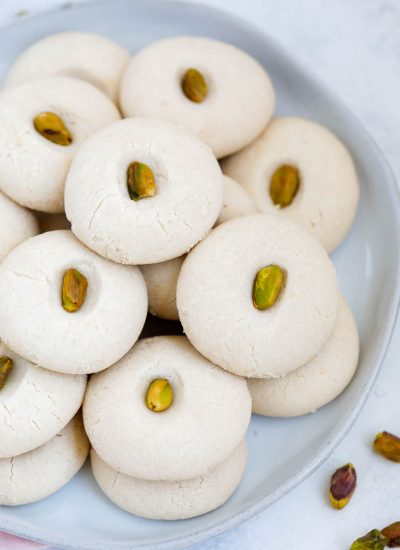 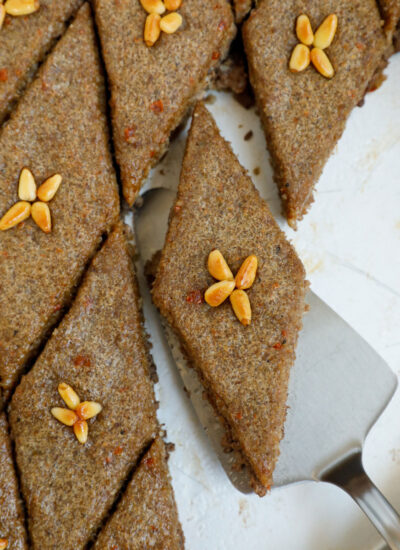 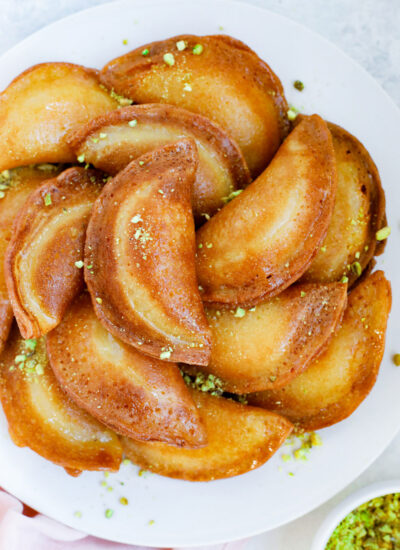 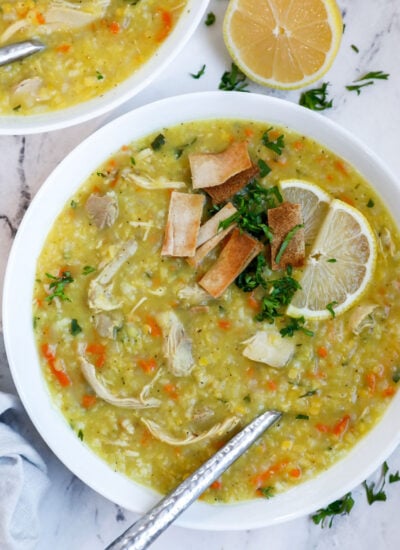 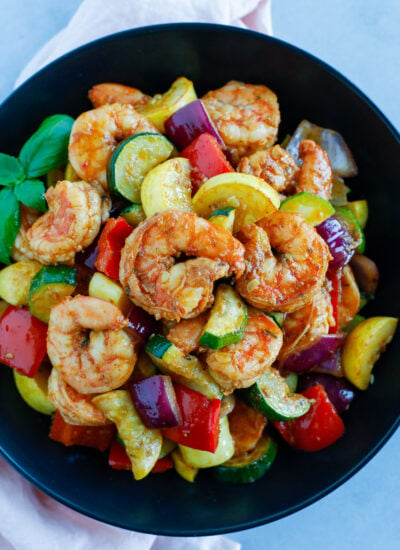 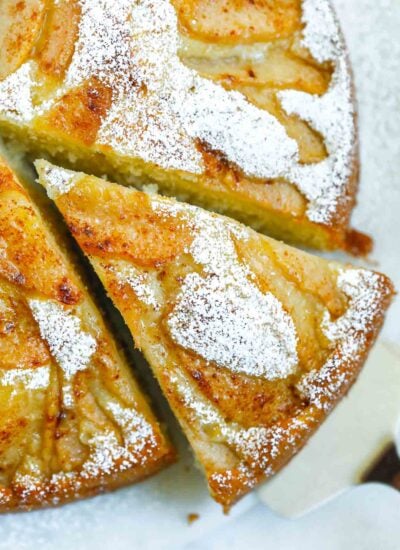 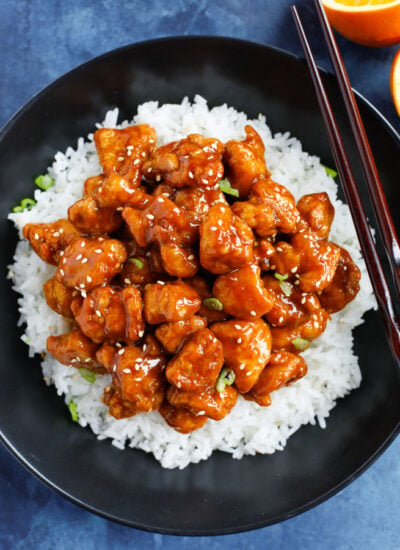 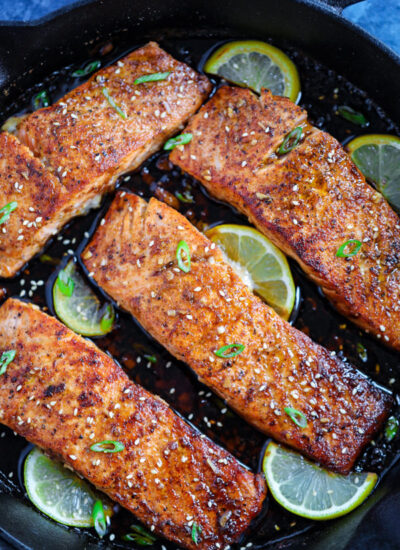 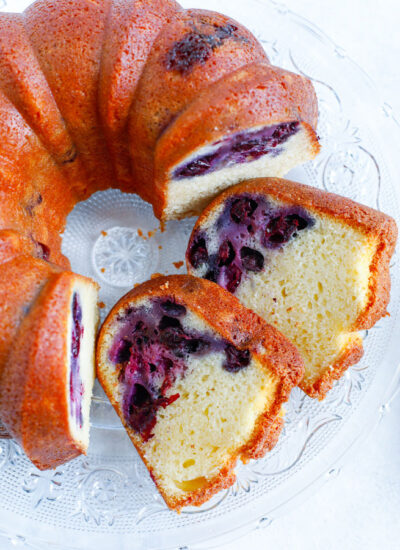 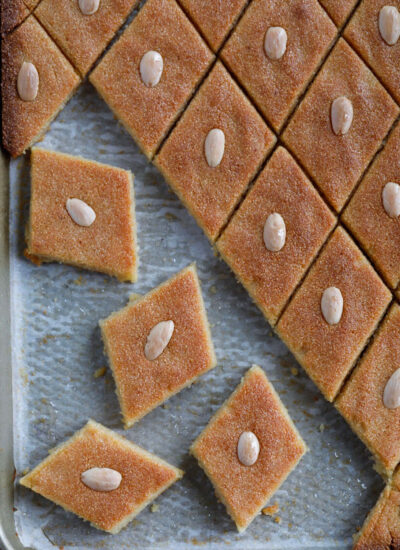